Samsung Galaxy A12 Review: From premium smartphones to budget handsets, the South Korean tech giant Samsung has been aggressively launching smartphones in India to gain more users and to fulfil the demands of mobile fans here. As we are in the third month of 2021, Samsung has already launched the Galaxy S21 series, Galaxy M02, Galaxy M02s, Galaxy F62 and Galaxy A12 — its first Galaxy A Series smartphone in India this year. The smartphone manufacturer is also set to launch two new mobile phones in the country — Galaxy M12 and Galaxy A32 — this month. So, even as the number of launches is massive, we take a special look at one smartphone – Samsung Galaxy A12.

Budget smartphones have always been popular in India and major Chinese smartphone brands like Xiaomi and Realme are already doing well in this segment. However, Samsung is looking to give them a run for their money with its own launches in this space. Samsung has recently introduced its Galaxy A12 smartphone in the country. Galaxy A12 is available in three colours- Black, Blue and White. The Galaxy A12 4GB + 64GB variant is priced at Rs 12,999 while 4GB + 128GB variant is priced at Rs 13999.

I have been using the black variant for almost 2 weeks and here’s my review on the same. But before coming to all the detailing part, we need to understand what is the major USP of this device. According to the company, the major highlight is its 48MP quad-camera set up, 6.5 HD+ Infinity-V display and a massive 5000mAh battery. This review may give you an idea of why you can look at buying this device or, perhaps not.

When it comes to design, this budget Samsung Galaxy A12 smartphone has almost clicked all the right boxes. The Galaxy A12 is made mostly out of plastic and has a matte finish. The smartphone is 8.9 millimetres thick and weighs 205 grams. The phone looks good on hand. Even being a budget entry phone, the smartphone may give you a premium kind of feelings. The device is easy to carry and offers a good grip. Even after using it for long hours, the device was quite comfortable to use.

If we compare Galaxy A12 with Nokia 3.4 which was launched in India at a starting price of 13,999 and Poco M3,  the device, I think, has managed to make its mark in this budget smartphone segment.  On the rear side of the device, the Galaxy A12 has a square quad-camera setup along with an LED flash. The device comes equipped with a 48MP primary lens, a 5MP ultra-wide-angle camera, a 2MP macro shooter, and a 2MP depth sensor. At the back, you will also see Samsung’s logo. Also, Galaxy A12 comes with in-built camera features like — Live Focus, Food, Pro, Panorama, Macro and many more. 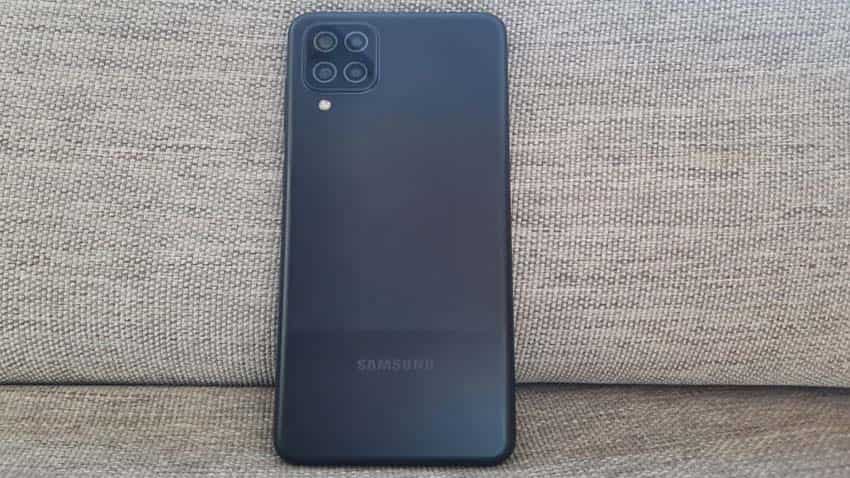 On the right side, the Galaxy A12 has volume rockers and a power button with a side fingerprint sensor — which worked fast while using it. The device houses SIM card tray on the left edge. At the bottom edge, there’s a dedicated space for a USB Type-C charging port, 3.5mm headphone jack, microphone and speaker grill. I personally liked the speakers of the Galaxy A12. They worked well even in crowded and noisy places like Metro and more. The connectivity options on the Galaxy include Bluetooth 4G LTE, Wi-Fi, GPS/ A-GPS and more. 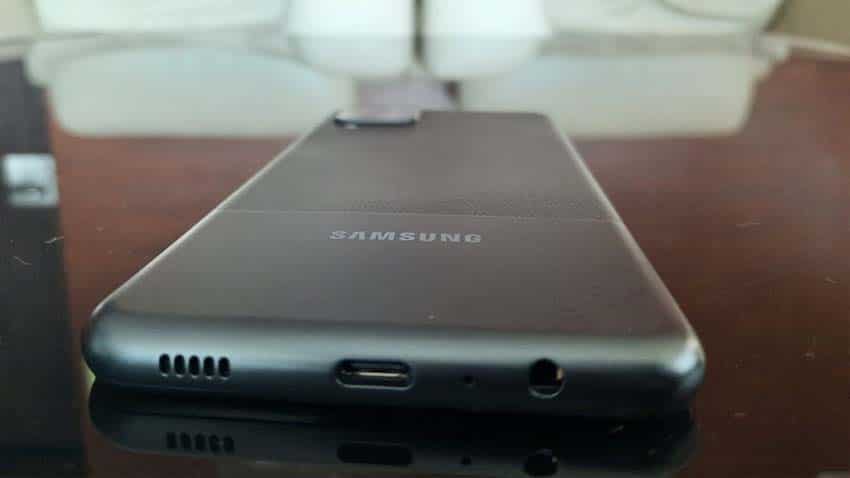 While using the Galaxy A12, I clicked pictures in almost every single mode offered by the device in different light conditions. Well, I liked the Live Focus feature in the device. The images came out pretty well and sharp during daylight conditions and especially during outdoor shoots. However, in low lights, the images lacked sharpness. They weren’t detailed enough. But when we see the price of this phone, it is still offering good features compared to others. Overall, the rear camera experience wasn’t disappointing. While recording videos, the video quality wasn’t up to the mark. The only major negative point I personally observed. 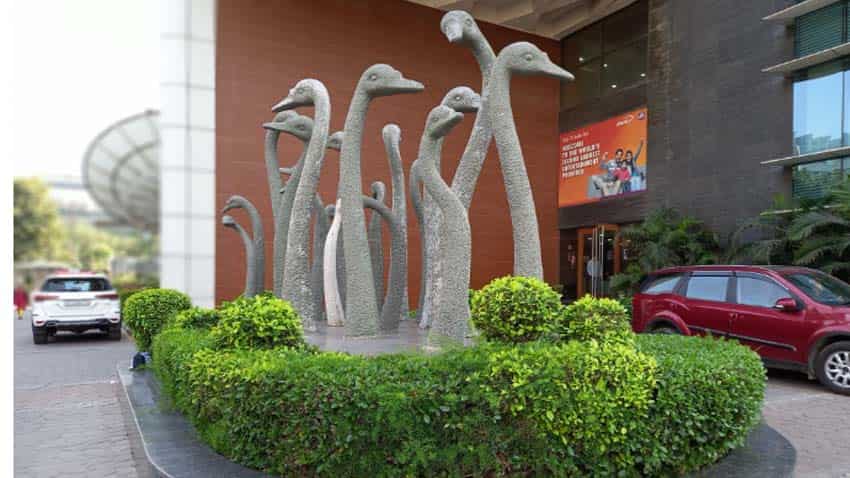 Samsung is famous for its displays and this Galaxy A12 also seems to meet the requirements of users. I really liked the big colourful display. The images came out pretty well even during bright light conditions. Samsung Galaxy A12 has a 6.5-inch HD+ screen with 720×1600 pixel resolution with a 20:9 aspect ratio. The device offers an adaptive brightness feature, which is impressive. Galaxy A12 comes with 8MP front-facing camera for video calls and selfies. The handset also comes with a face-unlock feature and I didn’t face any issue while using it. While taking selfies, the images came out sharp and detailed. 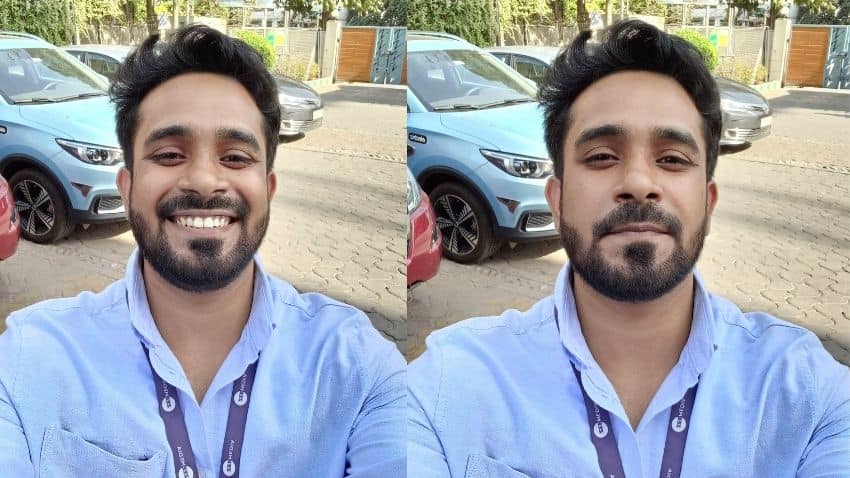 The good thing about Samsung is the company always focuses on providing a huge battery and fast charging feature in its devices. And like the other Samsung phones, the Galaxy A12 is powered by a big 5,000 mAh battery, that supports 15W fast charging. I played several light to heavy games on this smartphone but the device didn’t heat up even after watching videos on YouTube, Netflix, Hotstar and other platforms for long hours. The smartphone lasted for over a day on a single charge.

The Galaxy A12 is powered by a MediaTek Helio P35 processor and supports Android 10 and One UI Core 2.5. If we talk about its performance, it worked smoothly and is lag-free. I performed a daily basic task on this smartphone like switching between apps, using Facebook, Twitter, and Instagram, Gmail, watching videos, streaming music, and found no problem. The overall experience was good.

While there are plenty of budget smartphones in the market from various popular brands, I feel Samsung Galaxy A12 is available at decent pricing, starting at Rs 12,999 and offers several good features. The company has ticked the right boxes in the budget smartphone segment. For those who have less budget and looking to buy this device, I think it’s a good deal.

Previous SBI Home Loan EMI Calculator: Save more than Rs 2000 per month on Rs 50 lakh loan – here is how
Next Good news for Vi users! Vodafone Idea subscribers to get health insurance benefit on mobile recharges

Samsung Galaxy Buds Pro review: Listening experience just got better, but is it worth your money?